Whereas many European countries are making their rail networks fit for the future, Germany has for years invested too little in its railway infrastructure. In a 2015 comparison with selected European countries, Germany once again only comes in near the bottom of the ranking of European investment. According to a study compiled by the German Pro-Rail Alliance and the transport consultants SCI Verkehr, Europe’s most important major economies invest the following amounts in their state-owned railway infrastructure: ranked top was Switzerland with 383 euros per citizen, followed by Austria, which invests 192 euros per head of population. Both Alpine states have for years spent higher amounts on their rail networks than on road infrastructure. But network construction is also booming in other European countries: Sweden invests 177 euros per citizen, in the United Kingdom network spending is 152 euros and in the Netherlands the figure is 141 euros. Italy spends 72 euros per citizen on network construction, whereas Germany, which invests 56 euros per citizen, is still not coming closer to reducing the large funding gap between itself and other economically powerful European countries. Among all the countries examined in 2015, only Spain (36 euros per capita) and France (37 euros) invest less than Germany in their railway infrastructure.

Per capita state investment in infrastructure 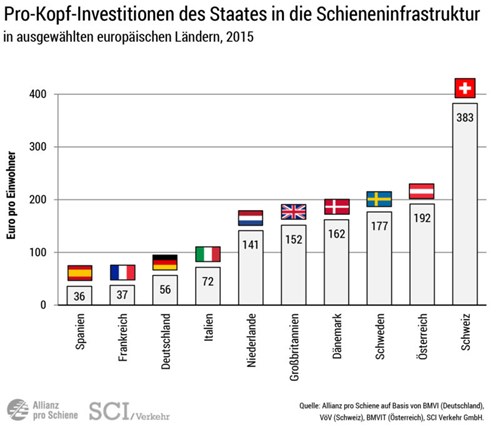 “Although the German federal transport ministry is congratulating itself for record amounts of investment in the railways, the German per capita amount in 2015 is poor,” said the managing director of the Pro-Rail Alliance, Dirk Flege, on Tuesday in Berlin. “A comparison over several years shows us a long-term German trend. The first year of the new performance and funding agreement, which the federal government negotiated with Deutsche Bahn, has unfortunately only led to a moderate increase in rail network investments,” criticised Flege. In the previous year, Germany invested 49 euros per person in its rail network. The amount required, according to the Pro-Rail Alliance managing director, would be 80 euros per capita in absolute figures. “With our German networks we should be able to top the amount that Italy spends,” said Flege.

Germany also lags behind in a long-term comparison 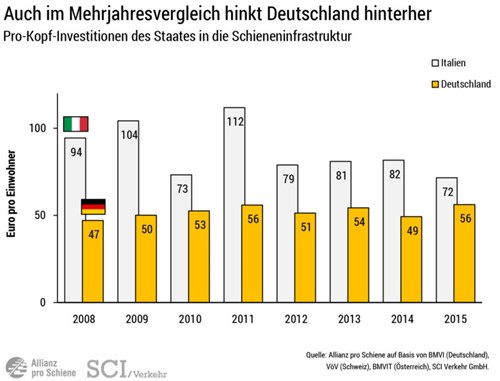 Unfortunately, Germany has for years invested considerably more money in road construction than in its railway infrastructure, criticised Flege. “The Alpine states are facilitating the modal shift in transport with targeted investments in their rail networks, whereas in Germany, even with the latest federal infrastructure plan, it’s business as usual with the wrong transport policy agenda.”

Switzerland and Austria favour the railways 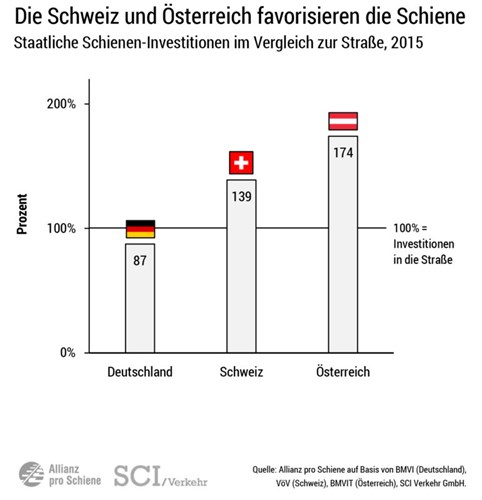 The Pro-Rail Alliance managing director called for rapid corrections to the current federal infrastructure plan. “The railways should be at the centre of transport policy focus, with 60 percent of the funding. Upgrading the network to enable freight trains with a length of 740 metres should be at the top of the agenda.”

SCI: Germany is a brake on European rail traffic

“We urgently need more capacity for rail freight transport,” said the managing director of transport consultants SCI Verkehr, Maria Leenen. “In fact, the very opposite is happening. Germany is a brake on European rail freight transport. With our infrastructure deficits we are increasingly becoming a bottleneck on the trans-European routes,” said Leenen. She referred to the ‘Betuwe-route’ in the west and the routes in southern Germany that were not completed in time for the opening of the Gotthard base tunnel. “Our neighbours have done their infrastructure homework whereas Germany’s politicians are still dithering,” criticised the SCI managing director.

Leenen warned that upgrading the German rail network for 740 metre freight trains needs to be completed quickly. “In order to make the most of the railway system’s advantages over road freight, our trains must become longer,” said Leenen. “Currently, trains with lengths of over four kilometres are in use in the USA and Australia. France is now testing freight trains that are 1,500 metres in length, and from 2018 trains measuring 1,000 metres will be in regular service on the French network. The German network is not even completely accessible for freight trains with a normal length of 740 metres.”

Allianz pro Schiene e.V. (The Pro-Rail Alliance) is the German alliance for the promotion of environmentally friendly and safe rail transport. It is an independent umbrella organisation that unites non-profit organisations and the commercial sector for the purpose of lobbying on behalf of the railways.