A key city centre Metrolink stop has been completely transformed with the help of a major European grant. A new passenger lift opened at the Deansgate-Castlefield Metrolink stop today, marking the substantial completion of major expansion work at the new-look stop. A brand new line of tram track, two new platforms and two sets of stairs all form part of the bigger, better Metrolink stop, which is linked to Deansgate train station by a newly modernised pedestrian bridge.

The work has been part-funded by a £10.8 million grant from the European Regional Development Fund (ERDF), following a successful funding bid by Transport for Greater Manchester (TfGM). The grant is also helping fast-track the first stage of Metrolink’s transformational Second City Crossing (2CC) line through the city, including a new stop at Exchange Square.

Trams are expected to run from Victoria to Exchange Square this winter, meaning more frequent services from Shaw & Crompton to the city ahead of the rest of the 2CC line opening in 2017.

An additional £4.9 million ERDF grant helped pay for the transformation of the new, expanded ‘posh’ Victoria tram stop, while in St Peter’s Square a locally funded, new, expanded Metrolink stop is also under construction and due to open in autumn 2016.

The new 2CC line and stop improvements will allow more frequent, reliable tram services to run through the city, helping meet growing demand to travel on the popular tram system.

The Deansgate-Castlefield stop has proved a hit with passengers thanks to the stop’s ‘green’ look.

The Deansgate end of the stop boasts a huge ‘living wall’ with plants and flowers, while trams passing through the stop appear to move along a bed of grass thanks to blocks of sedum planted between tracks, which are teeming with wildflowers.

The new platforms and surrounding stop area are paved with green slate while two new passenger shelters cast shadows of leaves on to the platforms, which are surrounded by extensive landscaping.

Councillor Andrew Fender, Chair of the TfGM Committee, said: “The new-look Deansgate-Castlefield stop is now among the busiest on the tram network and has been a great hit with passengers.

“It has already played a key role during the closure of the St Peter’s Square stop, as the two new track turn-backs meant we could use it as the start and end point for hundreds of thousands of passenger journeys over the summer.

“It’s a great example of European funding in action, allowing us to realise some of the many benefits of Metrolink’s transformational Second City Crossing a lot sooner.”

Afzal Khan, MEP for the North West, said: “The transformation of the Deansgate-Castlefield Metrolink stop is a fantastic boost for commuters and further evidence of the huge benefits EU membership brings to Manchester and the region.

“The new Metrolink stop is just one of over 200 projects across the North West funded by the EU Development Fund, many of which couldn’t have gone ahead without European funding. It’s great to see this money is being put to good use, providing a fantastic facility for the city.” 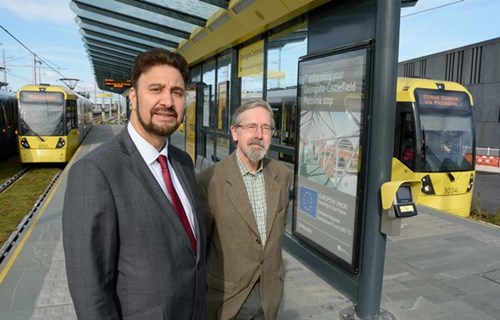