On 29 June 2018, Keolis’ Norwegian subsidiary, Keolis Norge, was awarded a contract by Bybanen AS, the local transport authority, to continue operating the Bergen light rail network for another eight years  and to also manage the maintenance of the trams . The renewed contract which is subject to a statutory 10-day standstill period will be effective from July 2019.

Bergen is Norway’s second largest city with a population of over 280,000 inhabitants. The project for the tram network was initiated by Skyss SA with the operation of the network awarded to Keolis in 2009. Since its launch in 2010, the Bergen tramway  network has undergone rapid expansion. Initially 9.6 km long, linking the city centre to Nesttun, it has been extended twice, once in 2013 to Lagunen and once in 2017 to Flesland airport, and is now 20 km long. The Bergen tram network has 28 trams manufactured by Stadler, capable of carrying up to 280 passengers. The service is currently used by 12 million passengers every year. Service frequency is once every five minutes during peak hours, with an extended service on Friday and Saturday nights. 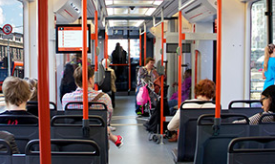 The tram network has brought economic and employment benefits to the city and the surrounding region. Since the opening of the network, the number of operational employees has increased by 80% with current staff numbers at 140 overall. Improvements to the service have caused passenger satisfaction rates to remain consistently between 95% and 99%.

With the success of the light rail network, Bybanen AS now plans to extend the network to the north and to the west, delivering an additional 10 km by 2022. This extension will also include a new depot and 12 to 14 additional new trams.

Keolis is the world leader in tram operations, operating on 930 km of tracks and 22 networks worldwide.

"We are very pleased by the trust that Bybanen AS has placed in us to continue managing the Bergen light rail network. At their side, we have successfully delivered continuous performance while meeting the demands of a growing network. We are looking forward to eight more years of collaboration with Bybanen AS, and we are more committed than ever to providing the residents and visitors of the city of Bergen with a sustainable, comfortable and safe service." said Bernard Tabary, CEO International Keolis.

More than just an everyday transport operator, Keolis is one of the world leaders in shared mobility. As an expert in multimodality, the Group is a partner of public policymakers who want to make mobility an asset for the attractiveness and liveability of their community. Dedicated to passengers and attentive to their individual needs, we work every day to provide more enjoyable, more human ways of getting around.