Minister François Bausch together with the technical services of the Ministry of Transport and Voyages Emile Weber, as well as representatives from Irizar e-mobility, have officially presented the first six electric buses of a total of ten which will be delivered over the course of this year.

These initial six units are 12-metre long Irizar ie bus models with two doors. They are equipped with USB ports and the ‘Eco Assist’ system which assists the driver in real time with a view to optimising driving, reducing energy consumption and increasing the bus's range.

These buses will operate on the 290 route which runs between Mersch (Gare) and Luxembourg (Terminus: Badanstalt) between the hours of 5:20 and 23:43. They have a range of over 200km guaranteeing 16 hours of driving in heavy traffic conditions.

The vehicles will be charged at night in the new Bissen depots using six chargers with Combo - CCS2 connectors that have also been supplied by Irizar.

It is worth mentioning that Irizar has decided to establish an exclusive and high-quality after-sales service in the city of Luxembourg, close to the new Bissen depots, which offers personalised R&M packages and is managed by technical experts and locally hired employees, thus helping to create local wealth and jobs.

Subsequently, four additional 18-metre units will be delivered that can only be charged in-depot. 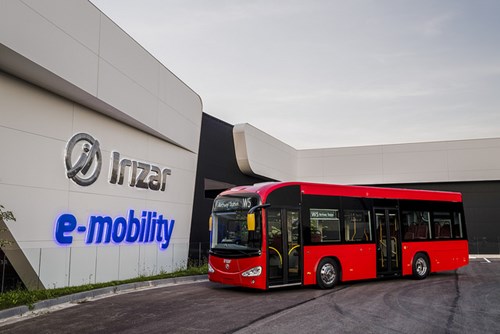 This bus model has been operating since 2014 in a dozen European cities with proven battery range, efficiency and reliability.

According to the Ministry of Sustainable Development and Infrastructures of Luxembourg and in line with the conclusions drawn from the Rifkin study, this project marks a new stage in the decarbonisation of public transport. Likewise, François Bausch remarked that the “electric initiative for line 290 is in complete consonance with the government's policy recommending that, in light of advances in technology, all RGTR buses in Luxembourg be completely zero emissions in 2030”.

For the Voyages Emile Weber group, the initiative forms part of the “Empowering Mobility” programme, the goal of which is to electrify mobility. The electrification of line 305 of the RGTR network was completely finished last February. A large number of buses on order (“Ruffbus“) have also been converted to electric and other projects in this area are under way.

Irizar is the parent company of a leading business group in the bus and coach sector and a benchmark in the sectors of electronics, communications (ITS solutions) and rotating machinery. With over 3,300 employees, the Irizar Group operates through five coach and bus production plants (Spain, Morocco, Brazil, Mexico and South Africa) and five other companies involved in different sectors in Spain, as a result of its industrial diversification policy. It also has its own R&D Centre with a long-term focus on the applied research process and the technological development of proprietary products and systems.