Amtrak Executive Vice President Stephen Gardner visited Network Rail’s state-of-the-art control centre at Three Bridges in Sussex and also went on a behind-the-scenes tour of London Bridge station – currently being rebuilt by Network Rail as part of the Thameslink Programme – as part of a fact-finding trip to see how investment is transforming the railways in and around the capital.

Amtrak owns and operates North America’s busiest railway route connecting Washington DC, New York and Boston. Faced with ageing infrastructure and congested major railway stations, such as Penn Station in New York, Amtrak is making the case for investment and is looking to Network Rail’s experience of delivering major upgrades such as the Thameslink Programme for inspiration.

Mr Gardner said: “It is life-changing investment that is happening here. The challenge for railways is always to have the presence of mind, amidst all the immediate demands, to understand the needs of the coming decades and to create the capacity to provide for them.

“What is particularly impressive here is the scale of the investment and the magnitude of concurrent projects. The UK is making a generational change to the network and the thought and care with which the work has been done and the ‘system view’ that has been taken is very important.

“For us in the States, we are just starting on the task of addressing the multitude of hundred year old assets that our railway relies on and we have to convince people to invest in renewing these and expanding capacity for the generations ahead.

“Our great-grandparents built much of our infrastructure and our parents and grandparents maintained it. It is now our job to rebuild it and expand it for the future.” 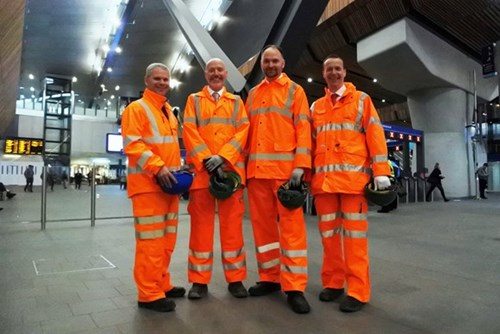 The Thameslink Programme is creating the capacity to run trains every two- to three minutes between London Blackfriars and St Pancras International and rebuilding London Bridge station, all part of Network Rail’s Railway Upgrade Plan. Further afield, investment in Network Rail stations such as Birmingham New Street and King’s Cross, have succeeded in driving regeneration and economic growth.

“Our work to rebuild London Bridge station is already having a positive impact on the local area, and when our work is complete in 2018 the improvement in train services will unlock further growth across London and the south east of England.

“Upgrading a Victorian railway is a huge challenge and we know that passengers have had a tough time as a result of our work, but it’s hugely positive that our colleagues in the States are looking to Network Rail and to Britain’s rail industry as an example of how investment in rail can deliver for passengers and the economy.”

As well as London Bridge, Mr Gardner, who is himself a former signaller (or dispatcher in US terminology), visited Network Rail’s Three Bridges Rail Operating Centre in Sussex, which controls the railway around London Bridge and up to St Pancras International. It features the first application of ETCS in-cab signalling and automatic train control on a high-intensity railway in the UK, which will enable up to 24 trains per hour to operate through central London from December 2018.

Network Rail owns, manages and develops Britain’s railway – the 20,000 miles of track, 40,000 bridges and viaducts, and the thousands of signals, level crossings and stations (the largest of which we also run). In partnership with train operators we help people take more than 1.6bn journeys by rail every year - double the number of 1996 - and move hundreds of millions of tonnes of freight, saving almost 8m lorry journeys. We’re investing £38bn in the railway by 2019 to deliver more frequent, more reliable, safer services and brighter and better stations.