A short ceremony this afternoon welcomed the arrival on London streets of a global first – a completely emissions free pure electric double decker especially designed and developed for Transport for London (TfL) by BYD.

Held at City Hall, the event saw Deputy Mayor of London for Environment and Energy Matthew Pencharz formally receive the first bus from Isbrand Ho, Managing Director of BYD Europe. This vehicle is one of a fleet of five which will shortly be entering service on Route 98 operated on behalf of TfL by Metroline. BYD is working with TfL and Metroline on an introduction programme which includes driver training and the installation of fast charging equipment at Metroline’s Willesden Bus Garage in north London.

The 100% BYD designed and developed vehicle is 10.2m long, features full air conditioning and offers seats for a total 54 passengers with a further 27 standees spaces (total passengers: 81). The BYD Iron Phosphate batteries deliver 345 kWh of power and can run for up to 190 miles of typical urban driving according to the internationally recognised SORT test conditions. Recharging takes just four hours and can be completed overnight using low cost off peak electricity. This is more than enough to handle most daily duty cycles. 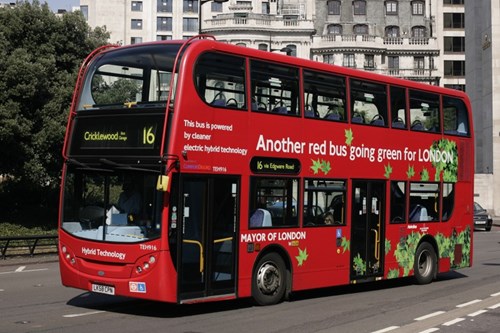 The new electric bus is equiped with Ventura doors like most of the London buses. An Inward Swinging door in the front function as the entrance door. A Plug Sliding door is the centre exit door.

Multiple Ventura doors can be seen on the London roads, including the iconic New Double Decker for London (or the so-called Borismaster).

“The Mayor of London challenged us saying that he did not believe an electric double decker was technically feasible but we took up the challenge and in less than two years created the bus Londoners can see today”, said Isbrand Ho, Managing Director of BYD Europe. “This is not a hybrid bus but a totally emissions free product which will give London a world leading position in its efforts to improve air quality”.

Leon Daniels, TfL’s Managing Director for Surface Transport, said: “BYD are a brilliant supplier. They lead the world in electric bus technology and we thank them for their efforts to make this new double decker a reality”.

Ventura Systems has, ever since its founding in 1994, been a manufacturer of innovative door systems for buses, trams, and metro. This period has seen the worldwide delivery of the company’s products from its base in the Netherlands to many renowned manufacturers of vehicles and rolling stock designed for use in public transport systems.

Right from the beginning, the company’s founders focused particularly on the high level of standardization of the range, in which – depending on customer needs – the modular design of door systems allows them to be adapted to any requirement. This guarantees both high standards of quality and an outstanding price-to-performance ratio.