Abellio operates public transport services in Europe, with both bus and rail networks. It was founded as NedRailways in 2001, before being renamed Abellio in October 2009. Abellio is a 100% daughter of Nederlandse Spoorwegen.

Abellio Group Head Office is located in Utrecht, The Netherlands. Other Abellio offices are located in Glasgow, London, Berlin and Stockholm.

Every day 20,000 Abellio people provide safe, easy and reliable public transport for more than a million passengers on our buses, trains and trams. Our operations span three countries across bus, tram and train services. In the UK we operate buses through Abellio London & Surrey, as well as Abellio Greater Anglia train services, and Merseyrail and Northern Rail in joint ventures with Serco. In April 2015 we start operating ScotRail, Scotland's National Railway. In Germany we operate Abellio Deutschland, serving communities in North Rhine Westphalia, Saxony, Lower Saxony, Saxony-Anhalt, and Thuringia. And in the Netherlands, Qbuzz and HTM run bus services in Fryslan, Groningen, Drenthe, Utrecht and tram services in the municipality of The Hague.

Established in 2001, Abellio won its first contract, Merseyrail, in 2003 in the United Kingdom transport market. Since then, the company has grown to become a major operator in the UK, adding Northern Rail and Abellio Greater Anglia to its portfolio. Abellio London & Surrey operates bus services in Central, South and West London and across North Surrey.

Abellio Germany is one of the leading public transport operators in Germany, providing bus services in the federal state of Saxony and rail services in North Rhine Westphalia.

Qbuzz was founded in April 2008. In 2013 NS acquired 100% of the shares from the founders. The company operates three bus/tram concessions in The Netherlands and is also a bidding entity for public transport contracts.

Our vision is to become a significant public transport company in Scandinavia built on partnership, ‘best practice’ and experience exchange within the Abellio Group.

The Abellio Greater Anglia franchise began operating on 5 February 2012. It provides intercity, commuter and rural train services throughout the East of England, including the Stansted Express.

Merseyrail is an urban network of vital importance to the transport infrastructure of Liverpool and its environs, operating on the Wirral and Northern Lines within Merseyside. It is one of the most punctual and reliable railway networks in the UK, with consistently high scores for customer satisfaction. 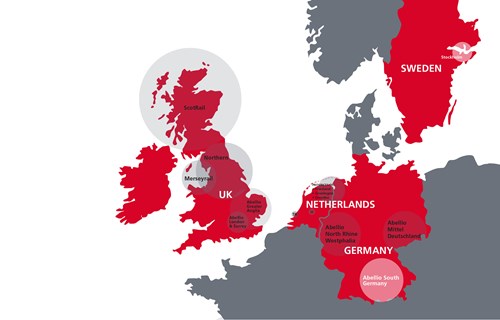